Several years ago a customer called from the West Coast.  She said the Seattle Zoo was celebrating it’s centennial and the theme was to be “Penguins.”  “Did I have patterns for Penguin Blocks?” she asked.  “No,” I said, but felt eager to draw some for the occasion.  It was so fun researching and finding out all about those little formally dressed birds from the southern hemisphere.  As with many things I undertake to draw, I had no idea there were so many varieties;  some were comical and looked frisky and some seemed aloof and even haughty.

Angela thought it was fun too.  She loves Penguins and composed a story about them to include in the Penguin Blocks package.  It’s all about the ladies going on a “shop hop” and the men having to stay home and wait on the nests.  As you can see (above) we even named them.  I hope you’ll agree the names were appropriate and that you’ll enjoy the characters in this fun pattern! 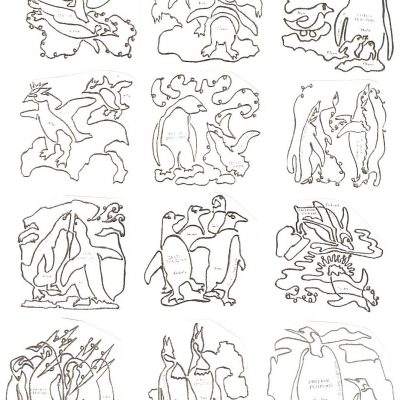