6 in stock (can be backordered)

THE STORY BEHIND WINTER GAMES: Back during the Salt Lake City Winter Olympics I decided to draw a panto depicting the events.  I had it finished, but didn’t know if I dared call it the OLYMPIC GAMES.  So, I called the Olympic committee offices and talked with their legal counsel.  He very nicely told me I wouldn’t be able use the name.  “How about WINTER GAMES as alternative?” he suggested.  So thanks to the Olympics  I had a great name.  I hope you think so too.

Julie in AK made this fun modern quilt for her friend – a PE teacher!  She stitched it with Winter Games during the Sochi Olympics.

The distinctive feature of a Pictogram is that it’s a pantograph with NO repeats.  It’s a complete 12′ roll comprised of 4 panels of 3′ each, all “hooked” together. I’ve added a dotted line at each 36″ section. While they can be stacked up as shown in the picture, they can also be quilted like an E2E or B2B giving lots of pictorial subject matter to your quilt.

To avoid placing an animal or image on top of itself all the way down the quilt I recommend starting at a different 36″ division for each “pass.” After starting, continue quilting through as many sections as needed for that row. You won’t have to stop – the line is continuous. For a full sized quilt I might make 7-8 rows, starting at various sections of the panto.

Be the first to review “Winter Games 11″ Pictogram” 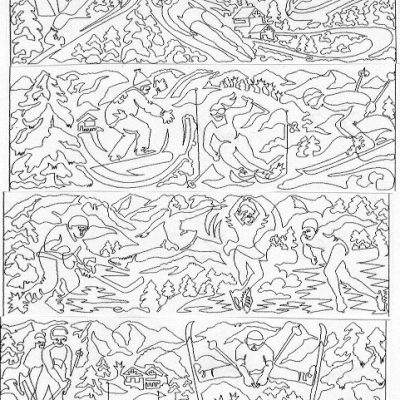