Here are some fun recipe my friend Helen from Tasmania sent me.  I haven’t had time to try them all, but Fairy Bread was fast and easy!

FAIRY BREAD:   1 slice bread smeared with butter and loaded with “Hundreds & Thousands”  (Australian for Sprinkles!)  I’ll bet you’ve seen the Ad on TV where the little girls bring their mother “Fairy Toast” and she doesn’t know what it is.  Well, this is it.  It’s a real thing!

PAVLOVA:  A meringue shell loaded with whipped cream and fresh fruit.  Yum!  Our family has been enjoying this for years.  How many?  You can guess.  Yes that’s me in the red dress.

ANZAC BISCUITS: “The tradition is that these were invented during WW1 as they keep very well if in airtight tin – so mothers could send them on the long journey round the world to their sons in the trenches of France.   ANZAC stands for Australian and New Zealand Army Corps.”

Thanks Helen for all these!

I haven’t had a chance to try out the Anzac biscuits (English for cookies), but I can provide you with some definitions.  Desiccated coconut is something we ran into when we lived in Malaysia.  It is dried grated coconut.  The pieces are much smaller than the large flakes in supermarket in the USA  And they don’t have powdered sugar on them.  Golden Syrup, Hmm.  Because my family was from Canada I know this.  It’s not Karo Syrup but that could be used as a substitute because it is an invert sugar.  It is golden colored and has some flavor to it.  It’s actually a refiners sugar syrup with a light caramel flavor, although not dark and strong like molasses.  You can easily find both of these ingredients online.

MARMITE and VEGEMITE:  Our Kiwi friends in Malaysia introduced us to this “favorite.”  It’s a brown spread for bread.  But don’t confuse it with Nutella!  It’s made from brewer’s yeast extract, vegetables and spices.  It is definitely an acquired taste!  But considered to be very healthy.

KANGAROO STEW:   There are lots of recipes online, but I didn’t get a recommendation for any.

WALTZING MATILDA?  from Wikipedia:  “To boil the billy most often means to make tea. “Billy Tea” was the name of a popular brand of tea long sold in Australian grocers and supermarkets.[9] Billies feature in many of Henry Lawson‘s stories and poems. Banjo Paterson‘s most famous of many references to the billy is surely in the first verse and chorus of Waltzing Matilda: “And he sang as he looked at the old billy boiling”, which was later changed by the Billy Tea Company to “And he sang as he watched and waited ’til his billy boiled …”.[9]

Be the first to review “Aussie Recipes” Cancel reply 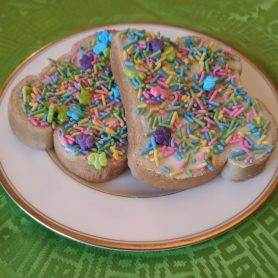